With the recent launch of our “ME Heroes” viral videos, we pestered Ray, the brains behind the videos, to share with us his concept.

Why the theme of heroes of motion graphics for this series of viral videos?
The super human efforts motion graphics artists put into meeting deadlines and pleasing clients…it’s amazing.
The ability to take criticism, endure multiple revisions and stay awake for 72 hours… just some of the special powers this special group of people have.
Hence we call them the Heroes of Motion Graphics.
We understand their pain and want to salute their spirit.

What are the sources of inspiration for the characters and the stories?
We talked to actual motion graphics artists to understand the pressures they face.
(We managed to talk to them while their machines were rendering)

Which motion graphics hero’s super power will you like to have – Left-Eye’s, Two-Brainer’s or Buddha-Face’s?
Two-Brainer. In this business you could always use a spare brain.

What’s the most heroic thing you have done?
I come up with ads on a daily basis, helping people lust for things they don’t need, hence keeping the economy going.

Name a person you consider a hero, and three qualities that makes him/her the definitive hero for you.
The person who invented this: 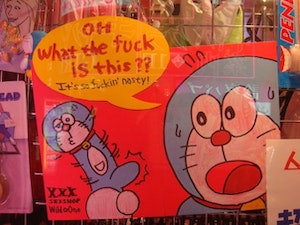 Because a hero:
1) has the guts to be original
2) beautifies our darker sides
3) contributes to society’s happiness.

Finally, tell us, just who is Ray?
There are two absolute truths Ray knows about himself.
One: When he yanks a hair out of his nose, he’ll sneeze.
And two: He wants to be the best creative he can be.
And he knows his ability to handle stress (racing street cars illegally), his endurance (staying awake for days making short films) and his patience (volunteering at a mental hospital),
Will see him through.

Ray has worked with blue chip clients such as Ford, adidas, McDonald’s, United Airlines, Volkswagen, Citibank and Chivas.
In places as varied as Shanghai, London, Hong Kong, Singapore and Minneapolis.
While bagging awards in shows such as Media Spikes, Adfest, Cannes and The One Show.
He is currently OT-ing at JWT Shanghai after stints in TBWA and Fallon.