Feeling safe with all you camera gear in a large and crowded metropolitan city like Shanghai, is always an adventure. When you first arrive you never really know what to expect, this is also part of traveling. But for us and many others with us, it feels really good when you finally find that safe place from where you can take amazing photos/videos freely.

Next to feeling safe, Shanghai has everything you are looking for when you want to film the Chinese urban city life, like the classic buildings in Yuyuan Garden. It is a real tourist hotspot, so it will be crowded, but you can take some nice shots from old Shanghai with in the background the new modern skyscrapers. And people told us that you can get the best dumplings there, the perfect way to celebrate a good shoot.

You can easily find your way via the good metro system that Shanghai offers and it isn’t expensive. It is the easiest way to find your way in this huge city. One of the best places to go and film in Shanghai is Nanjing Road in the evening and walk to the Bund. Nanjing Road is a modern street, which in the evening turns into a street full of neon lights. Such a lovely place to take some photo/videos at during the day as well as in the evening. Next to this street, we found some more typical Chinese streets, close to Nanjing Road, with some old Chinese street signs. So try to look for other places than the main street as well. Often you will find the best shots away from the beaten track. 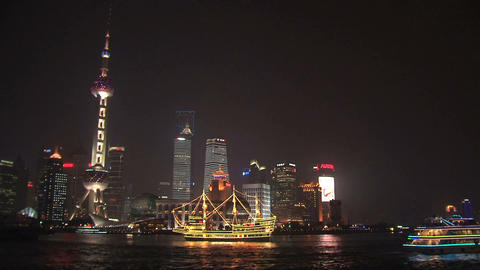 Away from the beaten track

Nanjing Road and the Bund are easy to combine because they’re found in the same direction. The Bund is a large and lively boulevard, where many tourists and locals go to get a view of the impressive skyline. Because it’s such a crowded place, it can be hard to find a spot for you to film from, as you don’t want people touching your tripod when you’re filming. If someone knows another good place to film the Skyline from, please share it with us! Even though it was so crowded, we still made some really cool (time lapse) skyline shots.

Notice: when it gets dark, it takes some time before all the lights of the buildings are on. But it is pretty awesome to see this change happening in the city, especially when the lights of the Oriental Pearl Tower (TV tower) are on when taking a time lapse video.

The Jing‘an Temple is one of the most famous temples in Shanghai. It is located on the West Nanjing Highway, the hustle and bustle area of the city. This beautiful Buddhist temple is located between the modern skyscrapers. A nice place to go and see many (normally busy) Chinese people praying and burning incense. Opening Hours: 7:30am – 5:00pm.

The Lujiazui Shanghai area is the perfect spot to shoot photos/videos of the Lujiazui Circular Pedestrian Bridge. Traffic and people come together on this bridge, which can make a nice time lapse. From here you also have a nice view of Shanghai’s many skyscrapers and of the Oriental Pearl Tower.

Filming during the morning at the Zhongshan Park was definitely one of our highlights when filming in Shanghai. The local staff with whom we were working, told us to visit Zhongshan Park in the early morning.

Feel at home in one of the biggest cities in the world! “I woke up early, not knowing what to expect this morning. I already felt very much at home in Shanghai and I hoped to see people doing Tai Chi. When I arrived outside the metro station near Zhongshan, I saw the first large group of older people doing Tai Chi. I started filming and there were some lovely people doing all kinds of Tai Chi on music, waking up early was already the best thing I did that day! I immediately felt “zen” when filming these people. Many of them were wearing white clothes and there was one man in particular who I wanted to film, because he had such a beautiful face. After a couple minutes he left and I thought he didn’t want me filming him, but within a minute he was back with a friend of him. I felt really welcome and enjoyed filming this first group. After this group I walked through Zhongshan Park and I was pretty much the only one who wasn’t Chinese. This made it even more fun for me experiencing the Chinese culture. At every corner people were enjoying their morning time in the park. They all did something different, from Thai Chi and Kung Fu to dancing and talking to each other. I just had the most amazing morning, so if you find yourself in Shanghai, don’t forget to wake up early and go the Zhongshan Park” – Johannes Oppewal, CEO TravelTelly

We definitely recommend Shanghai for a visit and as a city for taking photos and videos. Shanghai is growing fast, but even though it is a western city, you will also feel like you’re in the real China! Find more travel stories at www.traveltelly.com

Team TravelTelly consists of a small group of passionate people, who all love to travel around the globe and experience new cultures. We combine our love for filming and traveling. Not only can we make a travel video for you or your company, we also have our own online travel magazine, a platform for photo/videographers and we write articles about travel gear, apps and share lots of other travel info! For more information about what we can do for you, please look at www.traveltelly.com or contact us.