With nearly 20 years’ graphic design experience within the advertising industry, Simon Brough, Creative Director at Enchanted Studios, prides himself on not adopting a ‘house style’, ensuring that each production is uniquely tailored in visual styles.

With snazzy designs and eye catching motion graphics, it’s easy to see why Enchanted Studios has some of the most sought-after After Effects and Motion templates in the stock industry.

After gaining a Diploma in Design Communications, Simon continued on to attain a Bachelor of Arts Degree in which he specialised in Television Graphics. With the limited use of computers in the early 90’s, Simon started out with the foundation of practical, hand-drawn, background in graphic design.

From there, his ever-curious nature brought him further and further. We had a chat with him to find out more about his winding road. 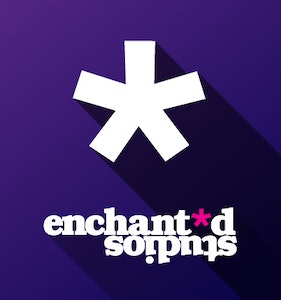 Mo**tionElements: Hi Simon! Tell us a bit more about yourself. Before Enchanted Studios, what were you up to, and how did you get started?**

Simon Brough: Before setting up Enchanted Studios I’d spent nearly 14 years in the advertising industry working, initially, as a graphic designer on print-based marketing campaigns – the internet was very young so most businesses mailed their marketing material.

It was during this period that I was introduced to After Effects and was able to start developing broadcast quality animation for use in television campaigns. With larger clients came bigger-budget commercials so it became possible to explore motion capture techniques and be given the luxury of ‘time’ to generate lengthy 3D rendered sequences. Rendering 3D animation on low-spec machines was unfeasible 15 years ago, unless the client had a decent budget – it took forever to accomplish!

Enchanted Studios was created as the brand for my freelance design services but has since become the identity of my growing motion graphics and template collection.

ME: As someone with experience of motion graphics before the world got hooked on computers, tell us something from that time.

SB: The television studios I worked for in the mid 90’s used large mechanical devices such as motion control cameras and rostrum cameras to create movement – everything was hand drawn or built. Digital techniques were around, performed on hugely expensive Quantel Paintbox workstations, but generally speaking it was all about live action and practical techniques back then.

My first experiences with digital motion graphics actually happened earlier, during my school years, on a Commodore Amiga back in 1991. I have floppy disks of animation work created using Deluxe Paint and Fantavision, produced on a computer which had a massive 1MB of RAM!

ME: What are you working on now?

SB: Creative After Effects templates. When approaching a new template design I try to create something different and unique, to what already exists on the marketplace.

ME: What’s the best thing about what you do?

SB: I thoroughly enjoy the process of creating engaging graphics design visuals – and then animating them! I’m constantly getting excited by new techniques and design styles, my desk is littered with sticky notes and sketched ideas for future animations.

I love coming up with new ideas and getting excited when all the elements come together as I’d imagined. I also love to watch movies and get particularly enthused by well designed title sequences.

ME: Do you have a favourite piece you made? If so, what is it and why is it your favourite?

SB: One of my favourite pieces is Neon City 3D Promo.

I actually built an entire 3D city for this piece. I’d just seen the movie Tron Legacy and was inspired to create my own city of neon lights. It was fun to create something like this from start to finish.

ME: If you were given a chance to work on one dream project, which software would you use to produce it and why?

SB: For my dream project I would begin with well drawn illustrations, created on paper using pen and ink. Then, using 3D software such as Maya I would begin to create the environments, utilising photographic textures, and the characters. Finally After Effects would add the finishing touches.

ME: So… Motion or After Effects?

Although I’m a Mac user I was an early adopter of Adobe’s After Effects, enthralled by its ease of use and versatility far before Apple’s Motion came along. I’m sure Motion is a capable and powerful program but I’ve yet to experience another piece of software which can compete with After Effects, for motion graphics work.

ME: How would you describe the work that you do?

SB: I would say that my style is ‘eclectic’. I have so many sources of inspiration that each project can be dramatically different in style from the last. I usually fully explore a technique and, once I’ve finished that project, I tend to move away from that visual style for the next one.

ME: Lastly, any advice for the aspiring artists out there?

SB: For any budding motion graphics artist, just starting out, the first thing you should do is buy a good digital camera. Take photos of walls, floors and skies. People will think you are odd, taking pictures of the floor, but these will become invaluable textures when creating work which is entirely your own creation. You’ll also avoid any copyright issues. I’ve used a photo of my wooden floorboards in several of my animations and templates!

The second best piece of advice I can give is to get away from the computer! – at least for a few hours. Your very best work will always come from making a few sketches on paper first – I promise.

Alongside the stock media production, Enchanted Studios is able to offer custom motion design services. Find out more at http://www.enchantedstudios.co.uk/.