Singapore, 17th November 2014 – MotionElements, Asia’s leading worldwide stock footage and audio marketplace, with offices in Singapore and Japan are announced as the main and only sponsor for the Japan Post Production Conference (JPPC). 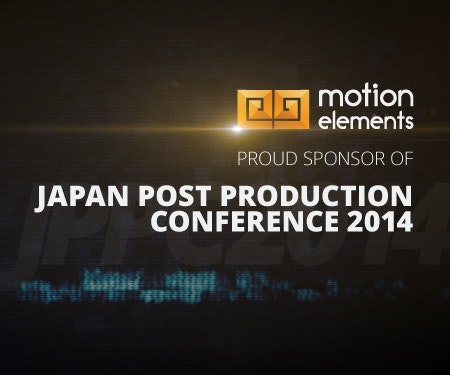 In conjunction with Inter BEE 2014, the largest broadcasting expo in the industry, JPPC will be held on 19th November 2014 at Conference Room 101, 1F, International Conference Hall, Makuhari Messe. It consists of a series of four-session workshops for media professionals to take their professional skills up a notch.

The international conference will be conducted by highly-skilled creatives Mr Abba Shapiro – award-winning writer, producer and director with over 25 years of experience in video and film production and Mr Robbie Carman – colorist, online editor, author and Apple certified trainer.

DaVinci Resolve, used by Hollywood blockbusters and primetime television shows for its power and precision will be explored by Mr Robbie Carman. The workshop will showcase the essentials of DaVinci Resolve such as the interface, stylizing and rendering footage. His next session highlights the Finishing Techniques For Broadcast, which includes colour correction, broadcast legalization and graphics finessing. If you are an editor, producer or colorist looking to build a complete workflow for your team, this workshop is the right fit for your needs.

“MotionElements is proud to be the main sponsor for the Japan Post-Production Conference. As a company made by motion creators for motion creators, we hope to increase and maintain the standards of creative individuals and the industry as a whole,” said Mark Sun, technopreneur and co-founder of MotionElements.

Joanne Chua, co-founder of MotionElements added: “We believe that our users know no boundaries. This is an exciting time for both creative amateurs and professionals as it constantly raises the bar and pushes the limits of the way we do things.”