The countdown has begun to one of the largest conglomeration of professionals from the broadcasting and media industries under one roof. The annual International Broadcast Equipment Exhibition 2014 (Inter BEE 2014) is one of the most widely known and highest ranked exhibition in Japan for its industry.

The Inter BEE is recognized worldwide as a major global media exhibition, bringing together the top of the crop of the broadcasting, video, audio and media businesses. The event is aimed at developing global business partnerships among companies. It is also a key venue where new and exciting technical developments are exchanged.

Among the exhibitors, MotionElements, the largest online video and audio marketplace in Asia, has confirmed its participation in the ranks of international brands present. Other international participants include Adobe Systems, Intel and Blackmagic Design. 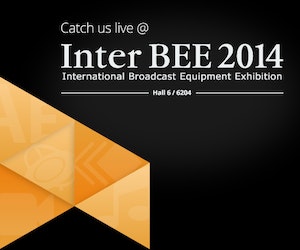 MotionElements prides itself as a marketplace designed specifically for the motion creator. Their presence at the Inter Bee 2014 is to further affirm their commitment to develop into a comprehensive marketplace for their users. “We’re motion creators too,” Mark Sun, the Co-Founder of MotionElements says. “We are constantly engineering our site to meet the needs of our users.”

The company has doubled in size every year since starting in 2010. This rapid growth has been largely thanks to their unique proposition to artists. User-led pricing, high-quality videos, and generous revenue sharing agreements has made MotionElements an invaluable hub for video professionals across the world.

In conjunction with the Inter BEE 2014, MotionElements is also sponsoring the Japan Post-Production Conference (JPPC), a series of workshops for media professionals, happening on 19th November 2014.